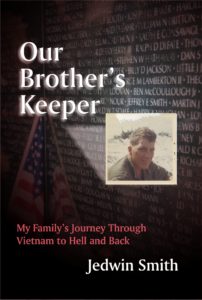 “Our Brother’s Keeper is an instant classic. A superb account of the impact of war upon those left at home, also one of the most profoundly moving books on love, sacrifice and loss that I have ever read. With this book, Jedwin Smith has elevated himself to the pantheon.”

Jedwin Smith spent 30 years trying to repress all memories of his brother, Jeff, who was killed in Vietnam. But in Our Brother’s Keeper he tells what happens when the Internet brings him into contact with several of his brother’s old Marine buddies, including the guy who held Jeff in his arms as he died. First via e-mail, and then in person, Smith gets to know these men — all scarred by the past they share. Together the author and his new friends make a pilgrimage to Vietnam, to visit the spot where Jeff died. In a remarkable twist, their Vietnamese guide turns out to be the former commander of the Viet Cong platoon responsible for the attack that killed Jeff.

A powerful story of brotherhood, bravery and healing.

—Reader’s Digest Editors’ Choice,
Featured Selection for March 2005;
Selected as one of the Top Ten Books of 2005